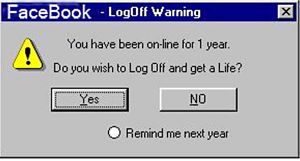 “Hello there, is this Gordon’s Pizza?”
“No sir, it’s Google’s Pizza.”
“I must have dialed a wrong number, sorry.”
“No sir, this is the correct number, Google bought Gordon’s Pizza last month.”
“Oh!  Okay then, I’d like to order a pizza.”
“Do you want your usual, sir?”
“My usual? You know me?”
“According to your Caller ID and our database, the last 4 times you called you ordered an extra-large pizza with three cheeses, sausage, pepperoni, mushrooms and meat balls on a thick crust.”
“Right! That’s exactly what I want.”
“May I suggest that this time you order a pizza with ricotta, arugula, sun-dried tomatoes and olives on a whole wheat, gluten-free, thin crust?”
“What?  I hate vegetables!”
“Your cholesterol is not good, sir.”
“How the hell do you know that?”
“We cross-referenced your phone number with your medical records and the results of your blood tests for the last 7 years.”
“Okay, okay, but I don’t want your awful vegetable pizza – I already take medication for my cholesterol.”
“Excuse me sir, but you have not taken your medication regularly.  According to our database, you only purchased one box of 30 cholesterol tablets from Unichem 4 months ago.”
“I bought more from another chemist.”
“That doesn’t show on your credit card statement.”
“I paid for it in cash.”
“But you did not withdraw enough cash, according to your bank statement.”
“I have other sources of cash.”
“That doesn’t show on your last tax return, unless you bought them using an undeclared income source, which is against the law.”
“WHAT THE HELL? ! ! ! !”
“I’m sorry, sir, we use such information only with the sole intention of helping you.”
“Enough!  I’m sick to death of Google, Amazon, Facebook, Apple and all the others!  I’m going to an island without the Internet, big data and and cloud connected cameras, some place where there is no cell phone service and no one to spy on me!!”
“I understand, sir.  But do you know that you need to renew your passport first?  It expired 6 weeks ago.”

As we careen towards Ray Kurzweils ‘Singularity’ we seem to be suffering more acutely from the “Futureshock” that Alvin Toffler predicted in his 1970 book.  While we are more technologically connected we feel less human connection and that’s the part that actually matters.  While people are backing away from some forms of social media there also seems to be a palpable push back from the sufferers of what I term “IoT Fatigue”.  This is the realisation that “If there is no cost for the product, then you are the product”.  Specifically the “free” app that gets it all going is a front end for a data collection system that exists for the purpose of monetizing the data.

Case in point, “Accuweather” a weather app, which has been accused of selling a users location data to a monetization firm even though the users turned location tracking off.

Cloud connected everything has its benefits, but it’s the real costs that we are only now waking up to.  While some laugh at Californians and their Senate Bill 327 “IoT Security” I doubt anyone will waive their rights to the privacy and protection it may bring if it’s impact is felt here in NZ.

Do your due diligence on the GAFA (Google, Apple, Facebook, Amazon) products you’re considering bringing into your home – or don’t, and leave that to the experts that have been working in this space for decades and who know the benefits and pitfalls of the various technologies, and will deliver the upside without the pain.

Want to know more?  Contact us for advice@aa.net.nz or get some human connection with our friendly experts by calling 09 377 3778.